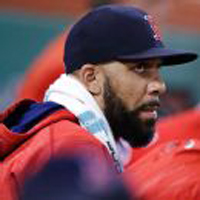 Boston Red Sox pitcher David Price said Thursday that video games are not the cause of his carpal tunnel syndrome but stressed he won’t play the popular “Fortnite” in the team clubhouse again “to avoid the distraction it has caused.”

“I’ve always played it with my teammates, during the offseason, at the field, at the hotel,” he said. “That’s kind of my generation. That’s what we do. If I need to shut down video games and pick up a new hobby, then so be it. But I do not think that’s the cause.”

A longtime video game enthusiast, the Red Sox ace was diagnosed this week with carpal tunnel syndrome. He has not pitched since May 3 but is scheduled to return Saturday at Toronto.

Red Sox starter David Price has carpal tunnel syndrome, and the team will decide what course to take after he throws a bullpen session.

Price insists that while video games might have contributed to his carpal tunnel, they are not to blame for the origin of the swelling in his left thumb, index finger and middle finger.

“This is just something that happened over time. This didn’t stem from any one thing,” the 32-year-old left-hander said Thursday. “I’m born in 1985, so that’s the video games generation. Being a Red Sox is the least amount of video games I’ve ever played being in Major League Baseball.”

Winner of the 2012 American League Cy Young Award with Tampa Bay, Price is 2-4 with a 5.11 ERA in seven starts during his third season with the Red Sox after agreeing to a seven-year, $215 million contract. The five-time All-Star experienced numbness in his pitching hand during a bullpen session Sunday. He had tests Tuesday and was examined by Dr. Matthew I. Leibman in Newton, Massachusetts.

Price and teammates have spent many hours playing “Fortnite,” trying to fend off monsters and save the world.

“I saw the Brewers were playing ‘Fortnite’ on their JumboTron,” Price said. “This is very common. I know a lot of teams, a lot of guys, are really into it.”

He added: “If that was the cause of the problem, it started back in 1997 when I got my first PlayStation when I was 12 years old.”

Price threw about 40 pitches in a bullpen session Thursday and was pronounced ready to return this week. His condition will be treated with dry needles, similar to acupuncture.

“Obviously it’s going to be outing by outing,” Red Sox manager Alex Cora said after watching Price throw at Yankee Stadium. “The communication has to be there. He has to be honest with us, and we will take care of him.”

Price believes the injury can be controlled. He will wear a brace and will switch to his right hand for activities such as brushing his teeth.

“I don’t think it’s going to go away in its entirety,” he said.

Surgery would be the final option.

Price was 6-3 with a 3.38 ERA in 16 games (11 starts) last year, when he was limited by an elbow injury. He said tests showed his elbow, forearm and shoulder were “pristine.”

He left an April 11 start against the Yankees at Fenway Park after one inning because of a tingling sensation in his left hand but said that was a different issue caused by a frosty night. No circulation irregularities were detected, according to the pitcher.

“I still have very cold hands and very cold feet,” he said. “The lady asked if me if I could pitch with a heating glove on. And I said, ‘No, ma’am.'”

Information from The Associated Press was used in this report.