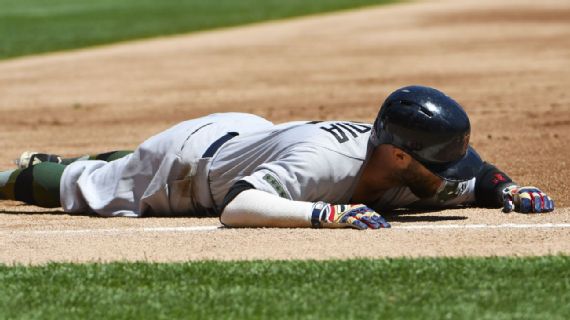 CHICAGO — One day after Dustin Pedroia sprained his left wrist, the best possible news would have been if he was cleared to resume playing immediately for the Boston Red Sox.

But it’s safe to say this is the next-best-case scenario.

Pedroia was examined Tuesday in Boston by Dr. Matthew Leibman and underwent an MRI that didn’t reveal torn ligaments or other structural damage. But given Pedroia’s history of wrist injuries, including September 2014 surgery by Leibman, the Red Sox placed the second baseman on the 10-day disabled list to give him the best chance of healing.

“It might have been a shorter period knowing Pedey would want to come back,” Red Sox president of baseball operations Dave Dombrowski said. “But talking to [manager] John [Farrell] and talking to [athletic trainer] Brad Pearson, we felt we were much better off keeping him the 10 days and letting him be healthy rather than pushing it and maybe nagging him the rest of the season.”

The Sox reinstated third baseman Pablo Sandoval from the disabled list. Sandoval has been sidelined since April 25 with a sprained right knee.

Dombrowski said team doctors believe Pedroia will be ready to play in 10 days. Pedroia was less willing to make that guarantee.